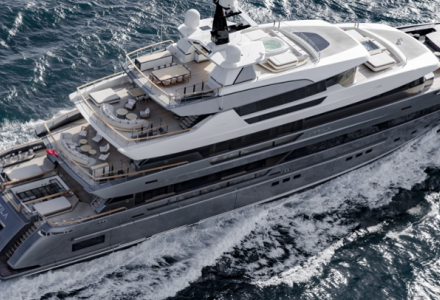 Inside 64m Attila by Sanlorenzo

Built by Sanlorenzo and delivered in 2019, 64.25m luxury yacht Attila he 64Steel offers features usually found on larger superyachts – such as the 275 m2 private Owner’s Deck – which combine with innovative layout solutions and elegant exterior lines to create a truly remarkable superyacht. 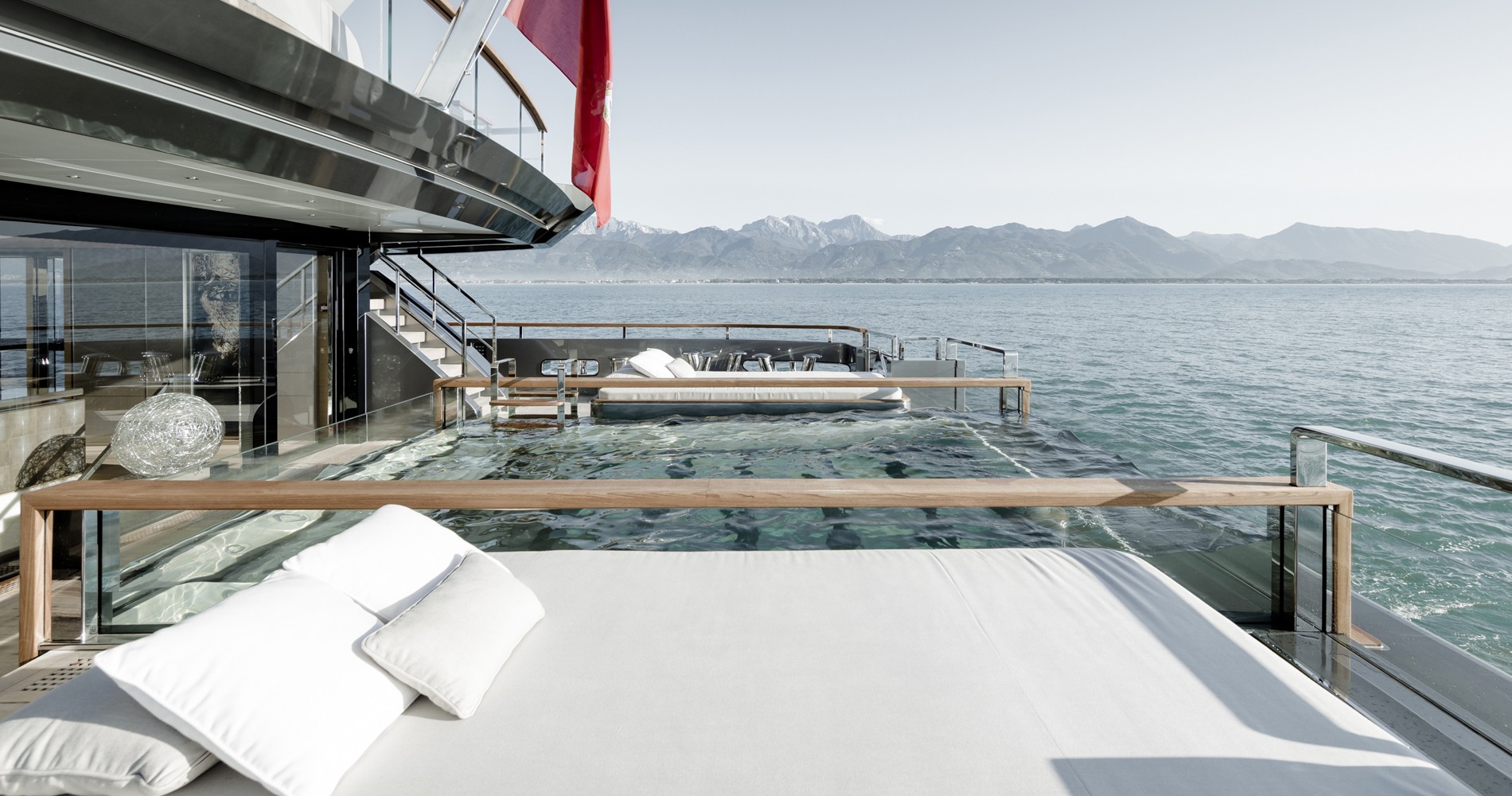 In 2019, 64Steel Attila was awarded the ‘Best Interior Design’ Trophy for yachts over 30m at the Cannes Yachting Festival World Yacht Trophies Gala Dinner. Attila which has an innovative super high tech TEAM ITALIA bridge on board, with a transparent Head Up Display. 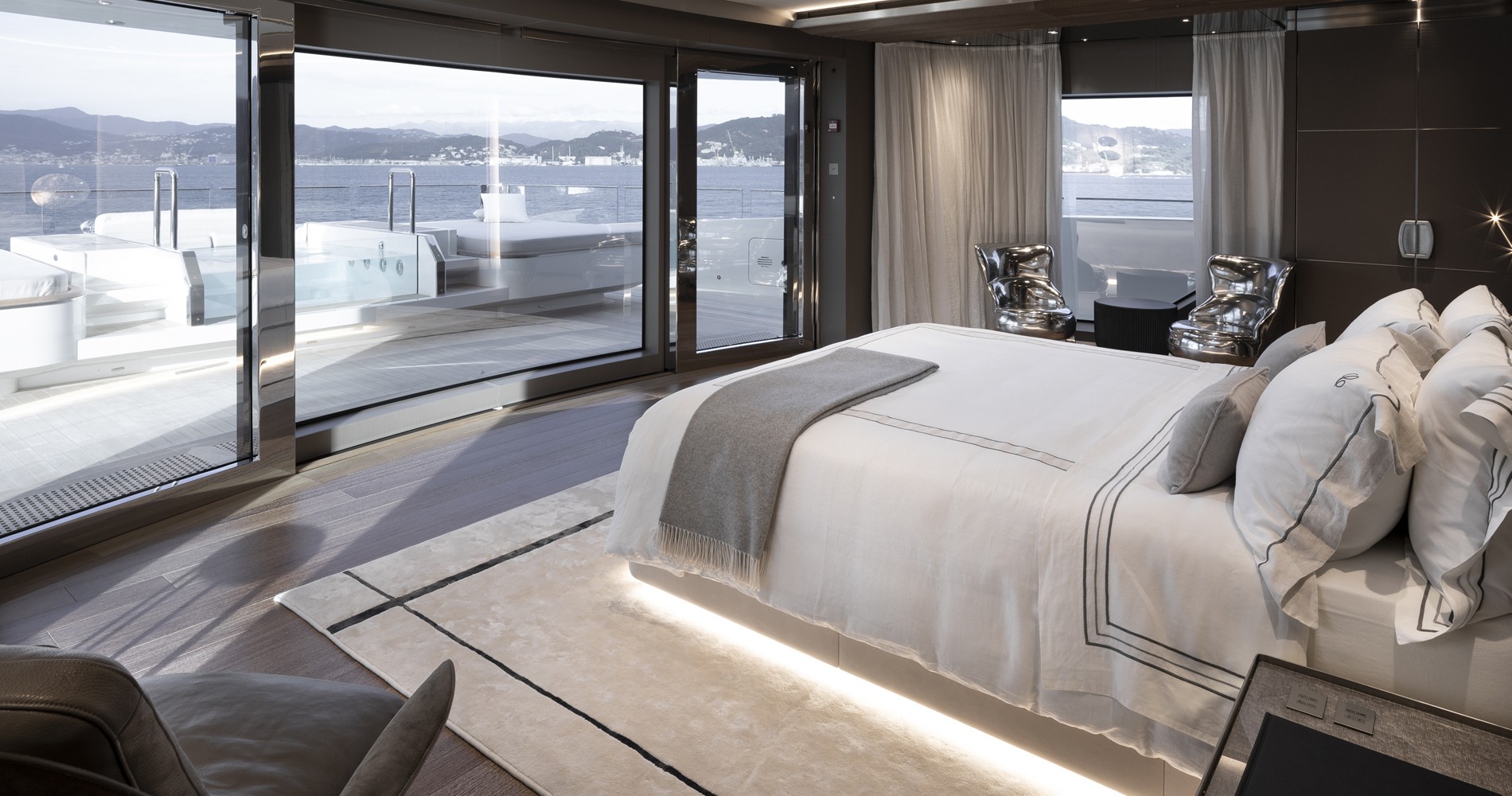 She can accommodate up to 12 people with 18 crew members. With a gross tonnage of 1600 GRT and at a striking 64 metres in length, 64Steel Attila is the result of close collaboration between the studio Officina Italiana Design and the styling division of Sanlorenzo. Her internal décor is the work of Francesco Paszkowski and Margherita Casprini.

The Main Deck at the stern and the Beach Club on the Lower Deck surely represent the most distinctive areas of the project. A strong hallmark of design and layout is the double stairway that connects the pool and dining area to the Beach Club equipped with a sauna, hammam, massage room, and gym, right at the waterline. With the bow mirror and the side platforms open, the Beach Club covers an area of 78 square meters. 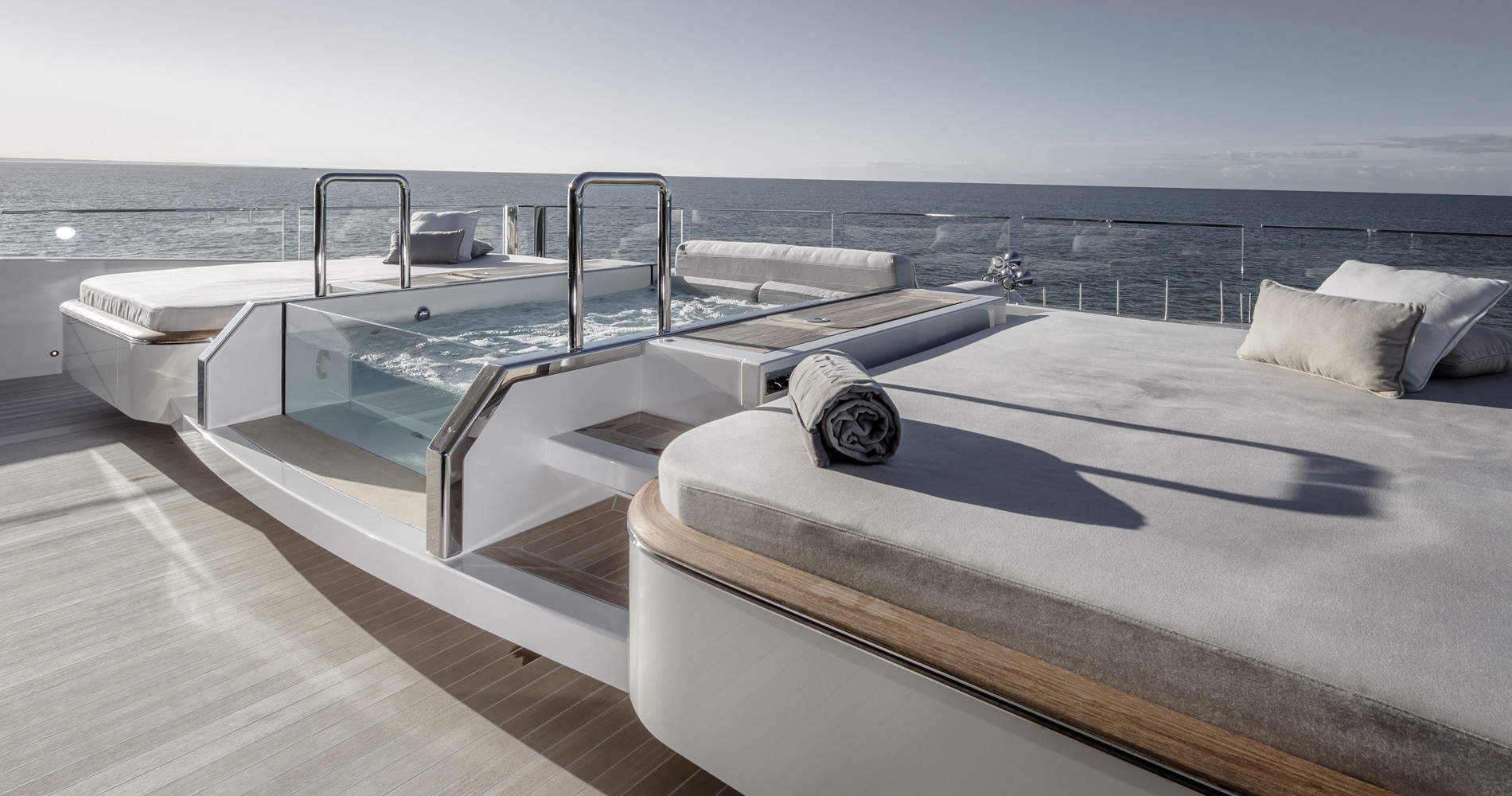 “The most important aspect that has characterized yatcht’s concept has been the will to obtain continuity between the beach club and an area we could call an “al fresco” veranda, that is the rear part of the Main Deck where the pool is also located, passing along an impressive stairway. The idea behind the layout in fact enables us to integrate the main aft deck and the beach club as much as possible. This characteristic thus enables us to enjoy both areas, around which the social life on board is focused, simultaneously, without separating the guests.” Antonio Santella, Vice President Sales & Marketing, Sanlorenzo Superyacht Division. 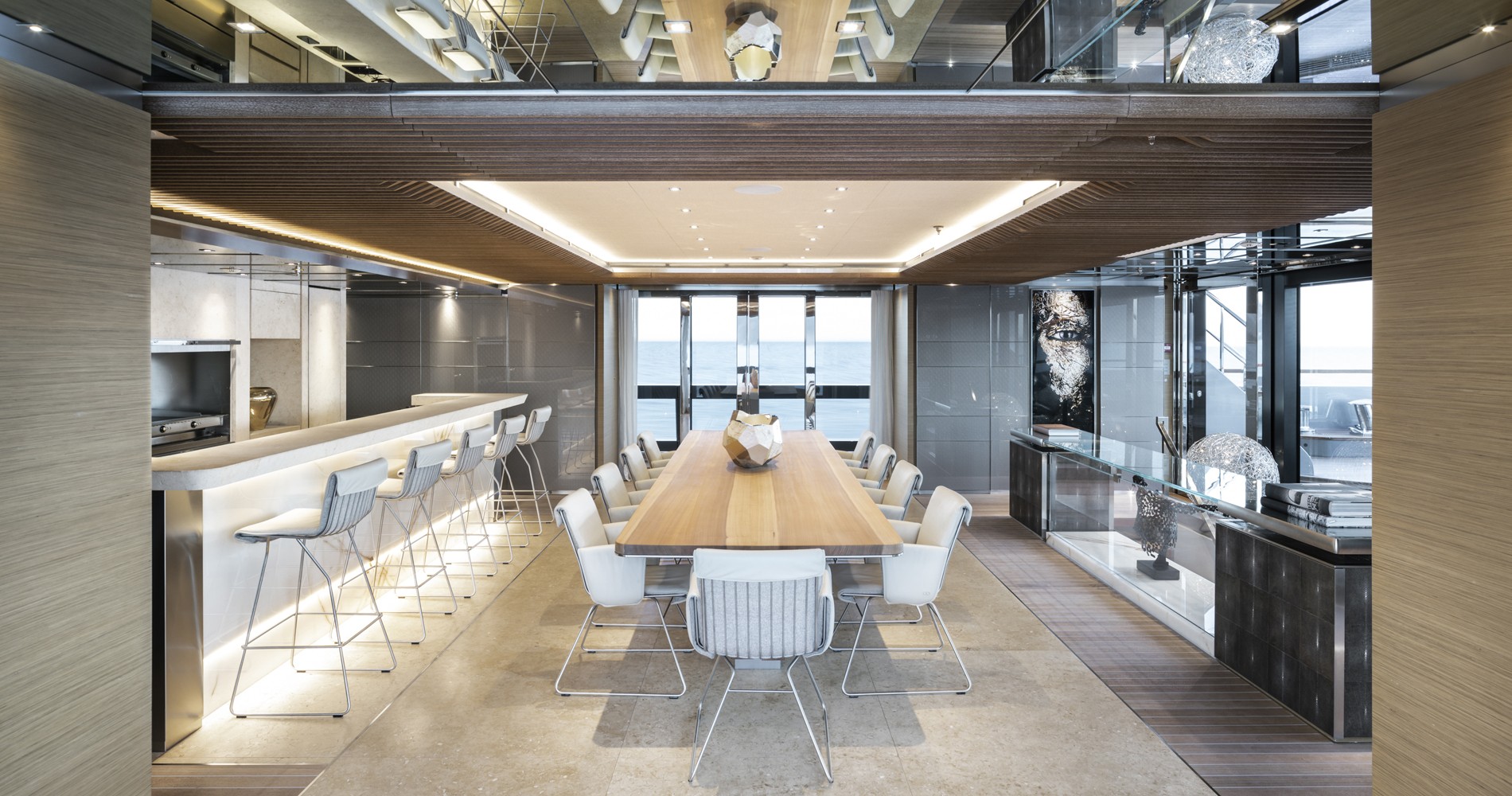 A real challenge for the production team was the creation of an enormous barbecue in the dining area of the main deck, a request which was particularly connected to the nationality of the owner, an Argentine entrepreneur who was already a Sanlorenzo client with the 46Steel Achille delivered in 2012 and was closely involved with the planning and construction of the new yacht from the beginning. The arrangement of an open fire in an enclosed space in fact required the use of A60 fireproof stainless steel and the installation of an advanced smoke removal system. 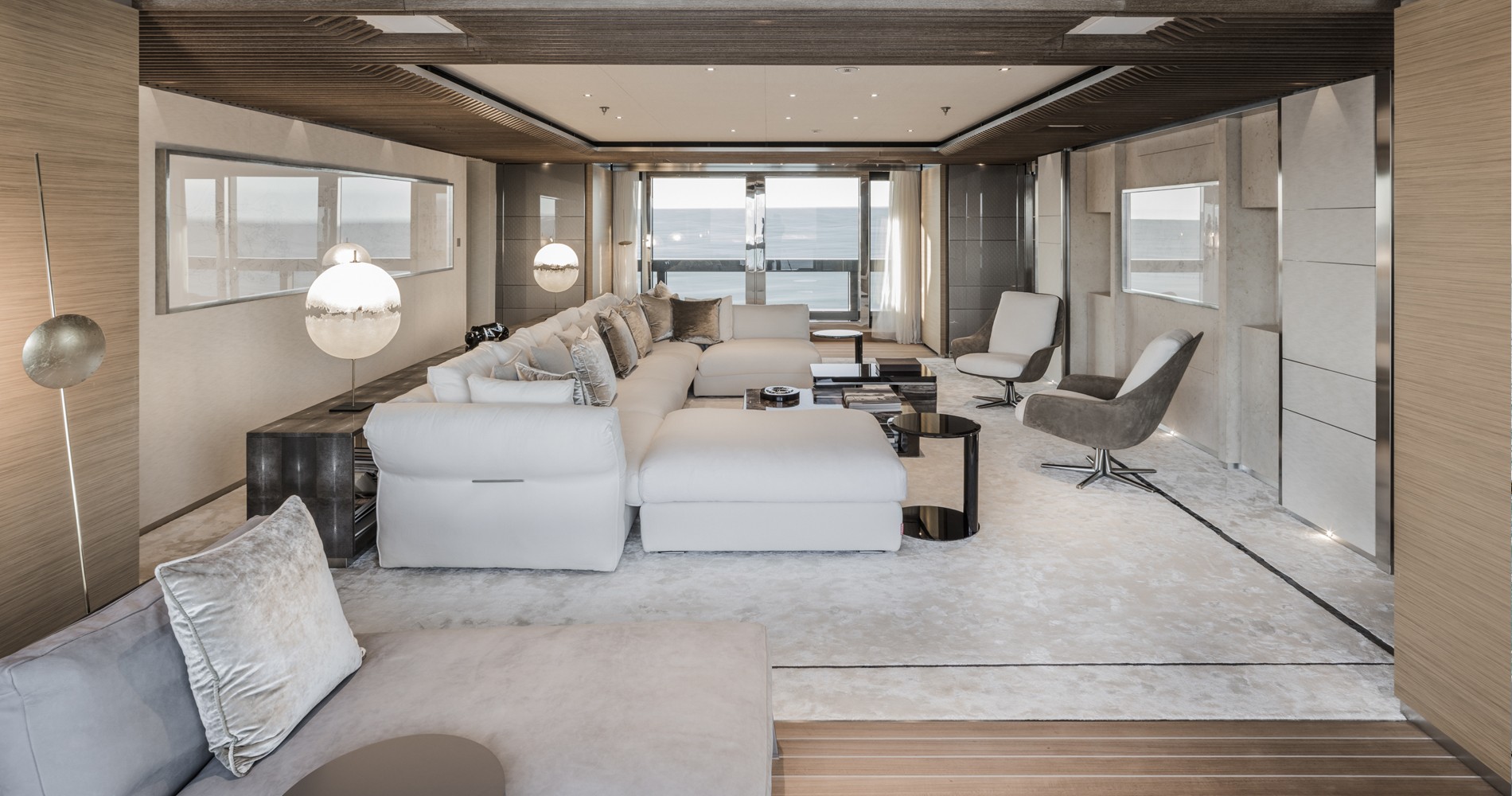 The crew, located in the Lower Deck, has private and independent routes with two service stairs and an elevator for the rapid transfer of cold and dry goods into the storage rooms. Below the Lower Deck, lies the Tank Deck with a refrigeration chamber, a refrigerated waste room, a multimedia room for the crew, a large laundry, and a climate-controlled “wine cellar” with a capacity of up to 500 bottles. 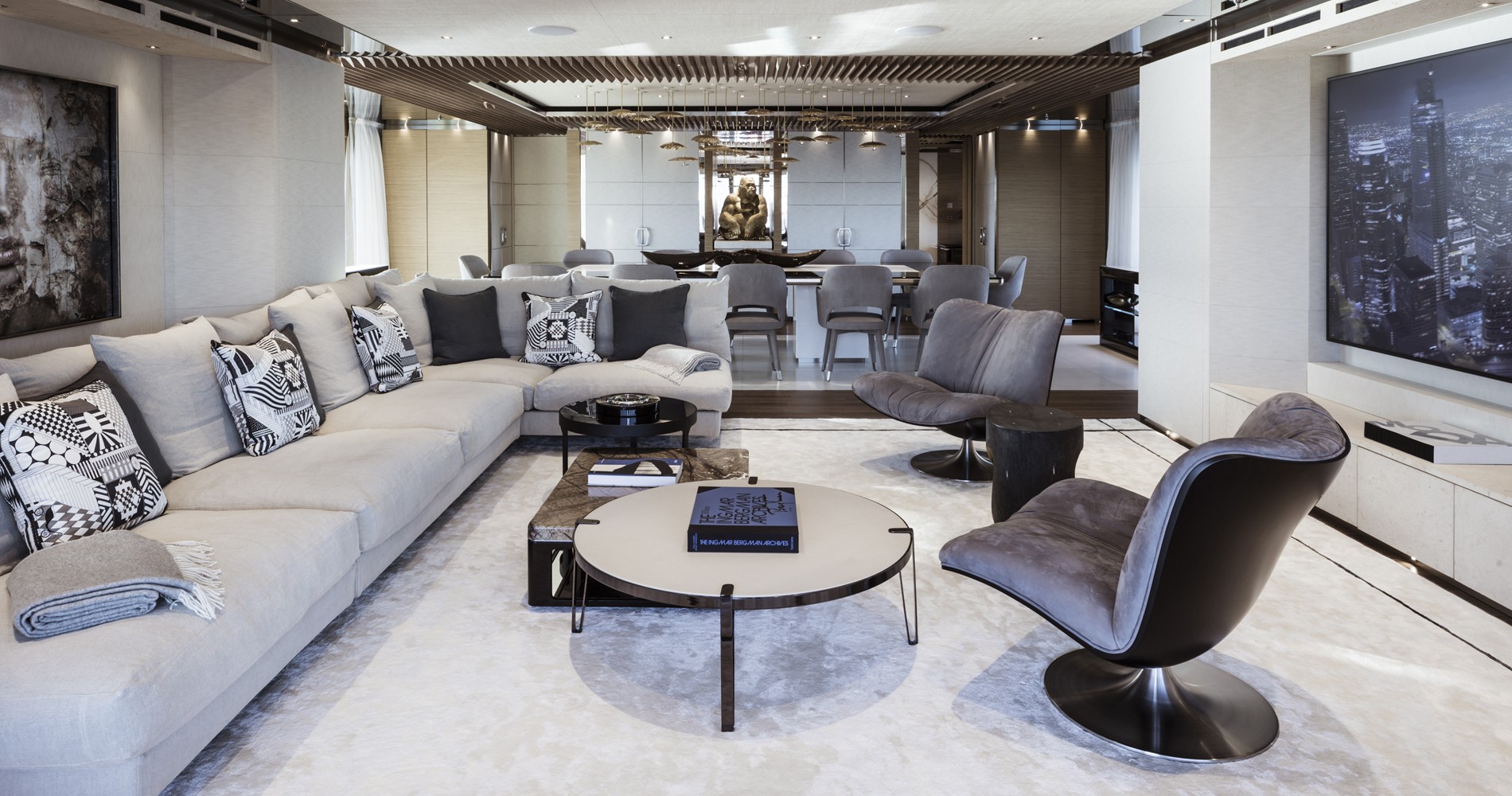 The four guest rooms and the full beam VIP suite are located on the Main Deck. The 64Steel Attila interiors were furnished and decorated by Francesco Paszkowski and Margherita Casprini. “We worked full speed with the owner and the shipyard – recalls Francesco Paszkowski – defining a modern space in South American style with natural elements such as teak, near which the owner wanted to add and mix many other materials he loves, and which are part of his personal experience. Attila is the yacht of a man who lives life to the fullest. And lives his yacht.” 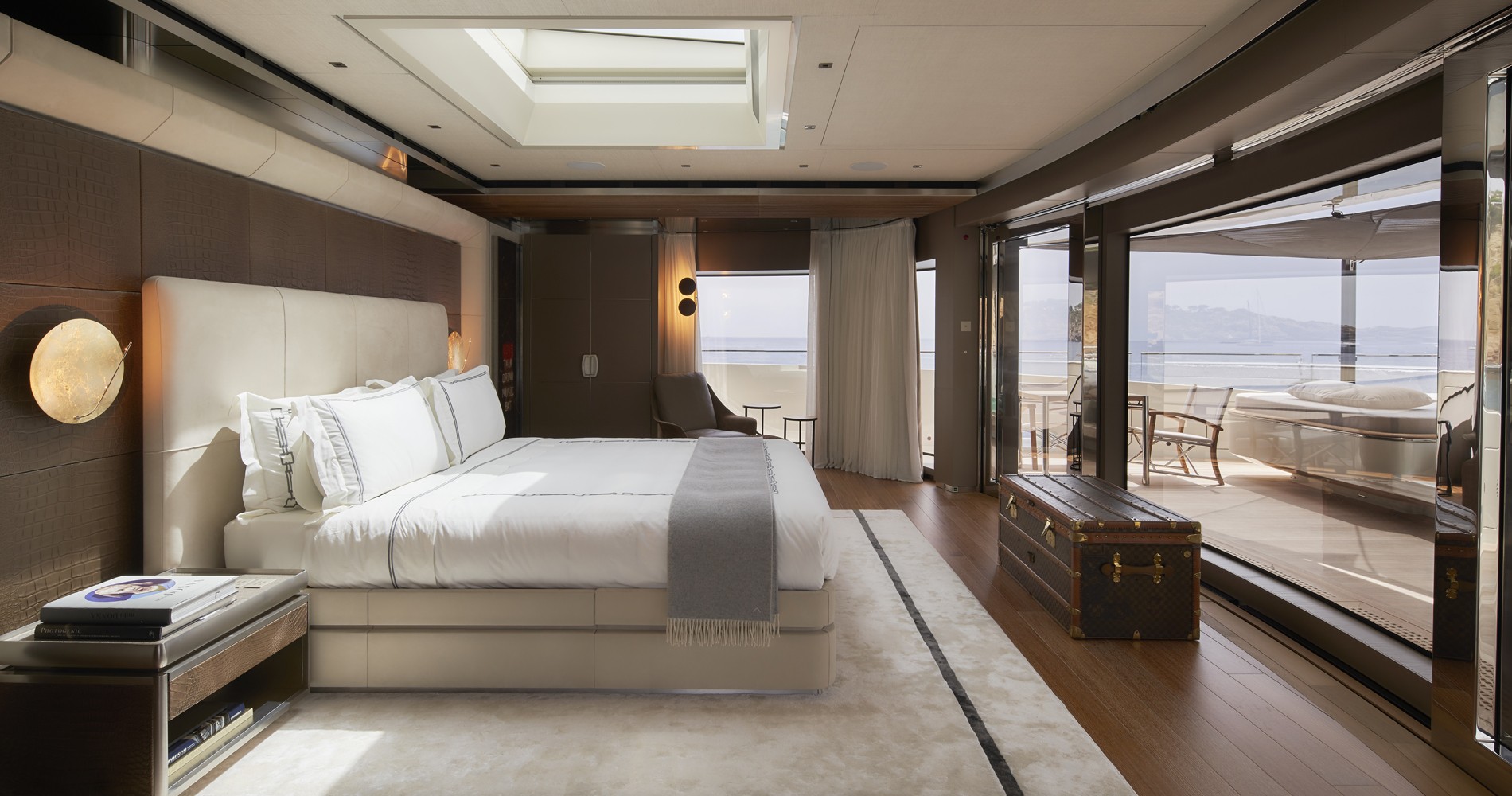 Regarding the furnishings, many pieces were custom designed, while others were created by some Italian and international leading design companies such as Summit, De Sede, Flexform and Catellani & Smith 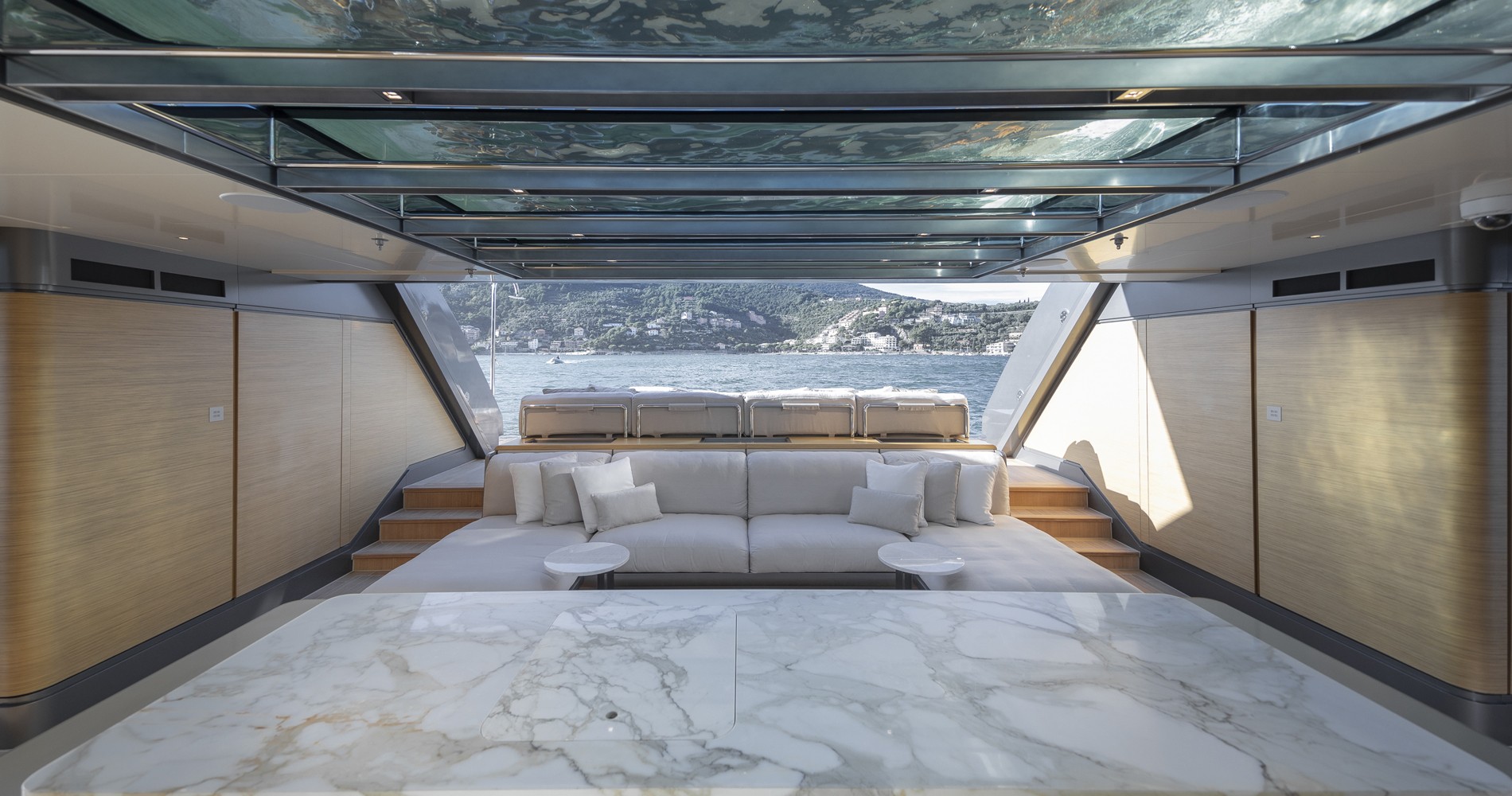 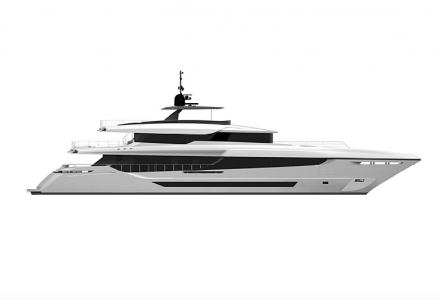 The New Build 43m Mangusta Oceano Project Como Has Been Sold
Camper & Nicholsons have announced the sale of the 43m Mangusta Oceano in-build project Project Como.Como is planned for early delivery in the summer of 2021. Hull number 06 in the series comes complete with in-house exterior lines, styling and all Italian décor. The interior has some upgrades and personalisation such as stainless steel details, ebony joinery, high gloss lacquers and fine leather throughout. Both the exterior and interior were designed by Alberto Mancini Yacht Design. With her full displacement steel hull and aluminium superstructure construction, this is a long-range ocean-going tri-deck yacht offering accommodation for up to twelve guests in five well-appointed cabins. There is a shaded guest lounging area with plunge pool at the foredeck, and, down aft, she boasts a spacious beach club with a bar and gym area along with a large swimming platform. She can reach speeds up to 15 knots and has a range in excess of 4,500 nautical miles at 11 knots. Her tender and toys are stored in a dedicated garage under the foredeck. Overmarine Group was founded in 1985 by the Balducci family. The shipyard builds open and displacement power superyachts under the Mangusta and Mangusta Oceanco brand names.Credits: Overmarine Group
January 16, 2021 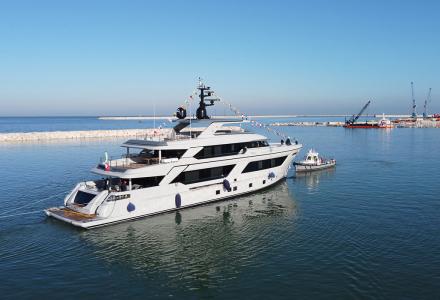 Cantiere Delle Marche Launches RJ 130
Cantiere delle Marche announced that explorer RJ 130 has been successfully launched.The exterior and interior of RJ range were designed by Francesco Paszkowski and naval architecture by Hydro Tec. The 40m explorer can accommodate 12 guests and seven crew members.“The RJ range of yachts is definitely a game changer for CdM. With three sales and five interior designs commissioned to Francesco Paszkowski, cooperation with multi-award-winning designers has already proven to be the right choice!” says Vasco Buonpensiere, co-founder and sales & marketing director at CdM.RJ features twin heavy duty MTU 10V2000M72 engines delivering 900kW each at 2250rpm, allowing a top speed of 14.5 knots. At an economic speed of 9 knots, she will have a range of around 5500nm with about 10% fuel left upon arrival.RJ 130 was sold to a European owner. “It was a great pleasure to work with an owner who was keen to bring his experience to CdM,” says Vasco. “Choosing CdM, he offered a serious statement of trust in our yard’s reliability and construction quality. I’d like to add that it’s inspiring and a reason for pride to see that a growing number of experienced and motivated owners prefer CdM to build their yachts,” Buonpensiere maintains. “Our clients have fantastic ideas for cruising, diving, luxury toys and serious boating. They are planning adventures, getting involved in underwater exploration, marine life observation, etc. As a shipbuilder, it’s exciting to be a part of making their ideas a reality, with this range merging the world of white yachts with that of real explorer vessels even more.”CdM’s story begins in 2010. Since 2015, the shipyard is the world’s leading builder of explorer yachts. Cantiere delle Marche builds long-range, luxury yachts and superyachts from 26m to 40m in length.Credits: Cantiere delle Marche
January 15, 2021 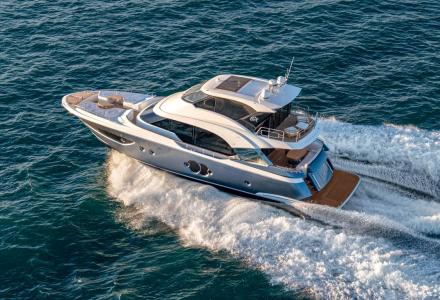 Asian Debut for the MCY 70 Skylounge
After the successful launch at the Miami Yacht Show last February, the MCY 70 Skylounge has arrived in Hong Kong for its first-ever Asian live premiere.The online live event staged by Asia Yachting, MCY’s official dealer for Hong Kong and Southeast Asia, aired on January 14th across a number of well-appointed media channels, arousing considerable interest and attention among the brand’s friends and followers around the world.Credits: MCY
January 15, 2021 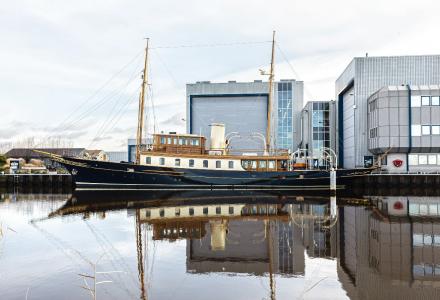 Atlantide Arrives at Huisfit
The 1930’s yacht Atlantide was shipped from Newport, United States, to the Netherlands, and arrived at Royal Huisman’s headquarters in Vollenhove in the first week of 2021. Following the 2020 refit by Huisfit of Jim and Kristy Clark’s famous J-Class yacht Hanuman, and with three newbuild orders already completed by Royal Huisman in the recent decades (Hyperion in 1998, Athena in 2004, and Hanuman in 2009), the owner of this 37m classic motorsail yacht, Dr. Jim Clark, decided the same craftsmen and women are best suited to take on this new project – rebuilding Atlantide at the Royal Huisman.Atlantide was designed by naval architect Alfred Mylne and built by the British shipyard Philip & Sons in 1930. The Royal Huisman’s team has an established successful track-record with the restoration of classics, conversions, and rebuilds of historical yachts: structural work, updates and conservation work are all embarked on with keen interest and great skill. Rebuild and conversion projects by Huisfit are never a “typical refit,” and the scope of such projects is often as comprehensive as a newbuild – perfectly suited for a team equally at home in both areas of expertise.Jan Timmerman, CEO Royal Huisman comments: “If a discerning client commissions a fourth very substantial project to the same shipyard, you just know that the work you perform is truly appreciated. So we are most honoured to find ourselves in the position to realise yet another dream for our esteemed clients Jim and Kristy Clark.Having received the prestigious Best Rebuilt Yacht award for rebuilding the 1913 Herreshoff schooner Vagrant in November 2020, we look forward to starting a new restauration in addition to the current refit projects of Huisfit – a project so grand in scale that we will be allocating it the same status as a new project, and, a very special, unique, and historic project which we are certain to make into a success thanks to our skilled craftsmen and women, together with the owners and their team!”The rebuild of Atlantide is scheduled for delivery in spring 2022.Royal Huisman is a Dutch shipyard established in 1884 in Ronduite, building and refitting custom luxury sailing and motor yachts at its shipyard in Vollenhove, the Netherlands.Credits: Royal Huisman
January 15, 2021 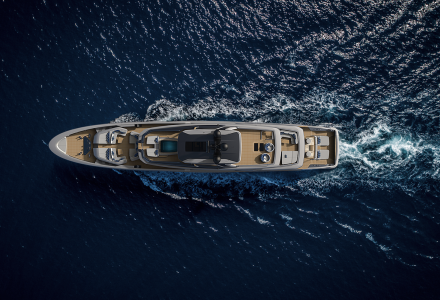 Keel Laying Ceremony for Baglietto’s 52m Hull Number 10238
The ceremony for the Baglietto’s Hull Number 10238 keel laying, the first of 52m of the new generation of TLine yachts signed by Francesco Paszkowski Design, took place just before the Christmas holidays.The 52m Hull No. 10238 is a yacht that draws inspiration from Baglietto’s tradition – preserving its most classical stylistic features – but reinterprets it in a modern, contemporary key. The stern has been completely restyled and is now open, with a beach club on three different levels. The large pool can be “hidden” by an original up/down moving flooring system. Inside, the salon’s floor-to-ceiling glazing ensures a constant contact with the sea even when living indoors. The sky lounge on the upper deck can be opened on three sides. A retractable ladder directly connects the sun deck and the upper deck at the bow, making the latter a natural extension of the former. The yacht will be equipped with a standard hybrid propulsion system that will allow one to choose a more efficient navigation mode, reducing both costs and environmental impact. When cruising in electrical diesel mode, the T52 will have a range of up to 7,600 nautical miles and will be able to remain at anchor for up to ten hours just using batteries. However, her two MTU 16V2000M86 engines will also allow her to reach quite an impressive maximum speed of 17 knots and a range of 3,600 nautical miles in traditional navigation mode.Baglietto Spa is Italian boat builder based in La Spezia and specializes in the construction of new aluminum light alloy yachts ranging between 35m and 50m in length and steel and light aluminum alloy displacement mega-yachts starting 40m.Credits: Baglietto
January 15, 2021
All news